Variation on the Lonely Impulse of Delight

We don’t need to seek a solitary place;
To be without preconceived ideas is the real solitude
Khongtrul Lodro Thaye

Between a rock and a hard place
Platitudes of shock
When attitude unleashed to wilds
And tempers cooked crisp
To be without preconceived ideas
Is the real solitude
Flatten each thought as it rises
Mind-hut panoramic view
Of vast sky all the time
Problems dissolve
World the world is always with us
Each jewel
A singular perfection
No need for a solitary place
The world the world
AH, the world
Liberate
Posted by Jacqueline Gens at 4:38 AM 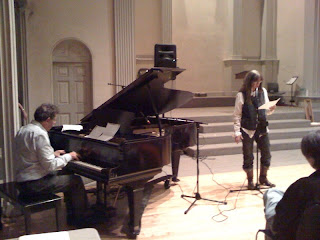 A You Tube variation here:


Peter Orlovsky's memorial at St. Mark's Church on September 22, 2010 brought together the extended family of Allen and Peter for a final farewell. We began the evening by meeting outside The Thirsty Scholar before making our way to Vaselka's famous Ukrainian restaurant on Second Ave for dinner and then on to the church for the memorial.


Here are some photos from the evening. 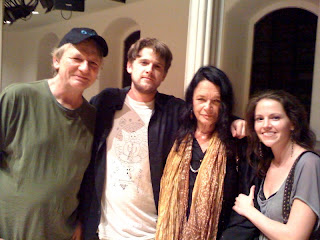 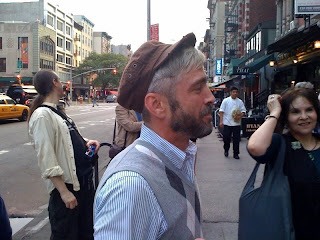 PHOTO: Peter Hale of the Allen Ginsberg Trust who organized the event 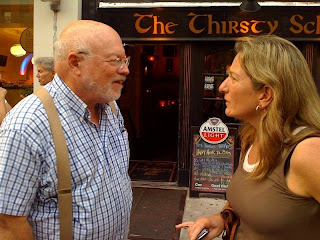 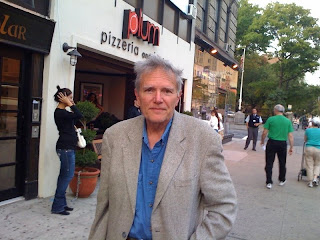 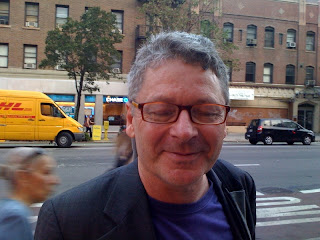 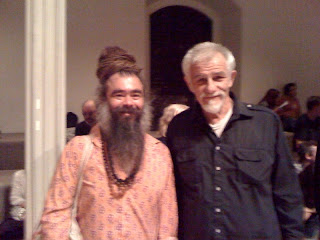 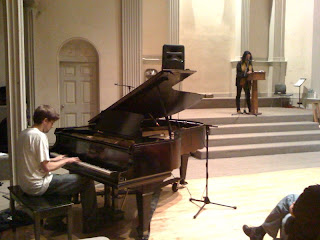 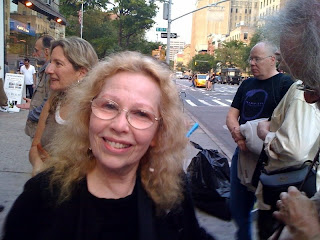 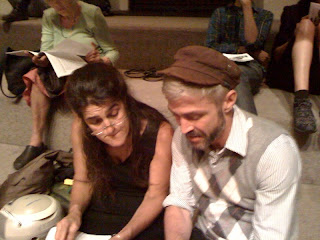 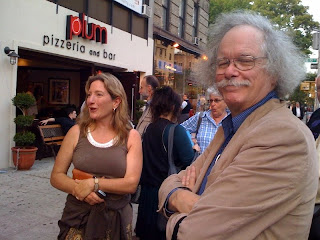 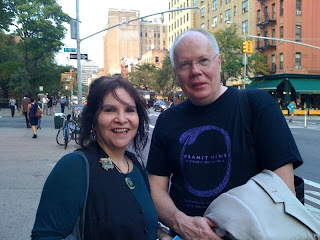 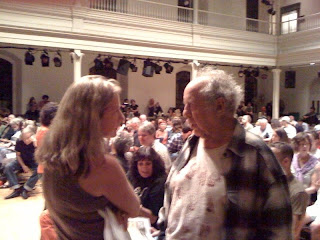 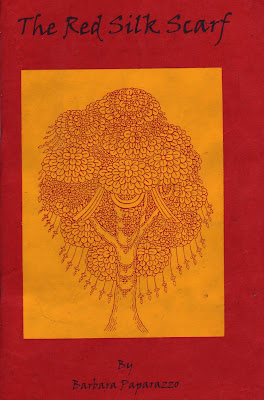 I am happy to announce that Barbara Paparazzo's chapbook, The Red Silk Scarf, has been published by Shivastan Publishing ( Woodstock & Nepal) The Red Silk Scarf is the record of a pilgrimage to Bodhgaya, India, showing how grief can become an opening into something larger than ourselves.

The chapbook is $12 including shipping. To order, please contact Barbara Paparazzo at blp@stuaf.umass.edu.

Not knowing better, we hired
a blue canoe and rowed
through reflections of snow-capped
Himalayas
to a small Hindu temple
where black and white goats played
in the sunshine. We snapped
pictures, sat on sun-warmed rocks
& admired the animals about to be
sacrificed, we found out later
& all that gamboling turned inside out
reminding me of that slice
unexpected, brutal
between my life when you were alive
and my life now.
Two pieces, both dead.

Posted by Jacqueline Gens at 3:45 PM 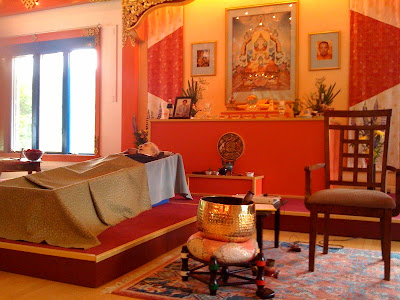 There will be a memorial Reading for poet, Peter Orlovsky on Wednesday, September 22, 8pm. St. Mark's Church. 10th St at 2nd Ave, NYC. The event is free.

The following photos were taken at Peter's Sukhavati ceremony at Karme Choling, June 2, 2010 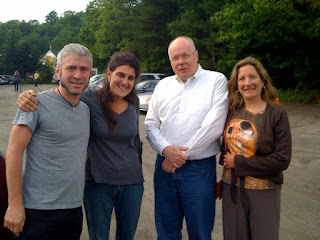 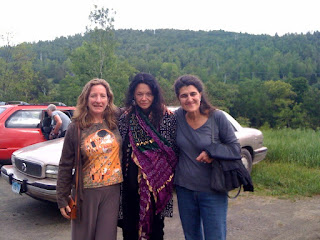 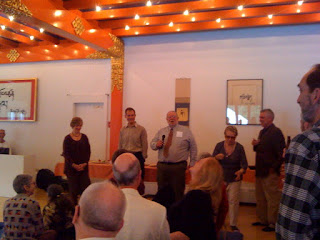 Photo: "Wake" in the packed shrine room at Karme Choling after Peter's Sukhavati

Account of Peter's Death by poet and long time friend, Anne Waldman who was able to be with him at the time of his death during her residency at the Vermont Studio Center :

Death of Peter Orlovsky “The Shellean farmer astride hid Pegasusian tractor” as Gregory Corso once knighted him passed on today, May 30 2010 to the elysian fields, a bardo of becoming. First glance hour earlier Peter was resting with “trach” in throat in orange sheets at the kind Vt Respite Center in Williston, Vermont ( but no extra tubes/ heroic measures for this advanced cancer on his lung!), a copy of the Songs of Saraha by his pillow, photo of beloved Allen Ginsberg companion of many years on the wall, other Buddhist images, iPod of music he loved including chants by Buddhist nuns, cards from friends and out the window a bird feeder with finch and red-winged blackbirds landing/taking off. Chuck and Judith Lief, faithful guardians and friends at his side. He had been moved less than 48 hours earlier from intensive care at a hospital in Boston, finally to hospice. His body we were touching we noticed suddenly turned cold like death was in the room. We got the nurse. Judy and I stepped out when suddenly Chuck called us back. Peter had opened his eyes. Chuck said “It might be the last time”. By his side now, looking into his eyes told out love, I thanked him for his presence in our lives, his poetry his care and love for Allen, his work at Naropa. Ah, I thought a flash of recognition shivering through! slight movement of mouth, light coming in on his handsome face through the window now, and Judy singing om a hum vajra guua padma siddhi hum in crystal voice said “don’t be afraid”. Joined in. Last breathes, one coming late, staggered: his heart/breath stopt. Poet Christina Lovin in room with nurse gave gentle witness who checked the clock 11:39 I think or so a.m. Earlier we’d played recording of Peter singing his Raspberry Song with great heart-soaring yodel and “how sweet you are”. “Make my grave shape of heart so like a flower be free aired and handsome felt” ( “The Snail”). Tibetan Book of the Dead readings, in full final repose arranged with blue shirt, hands folded, consciousness a joyful gardener sprite? no fear, no fear working its way out… Anne Waldman 5.30.2010 Vt Studio Center 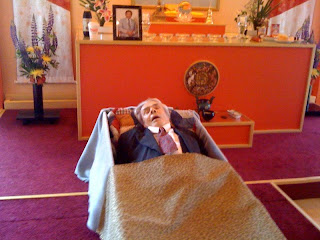 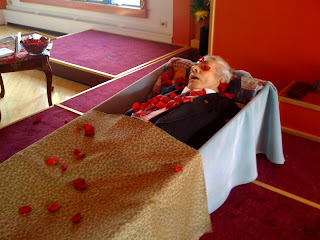 Photo: Peter with rose petals in honor of his gesture upon Allen's Sukhavati in 1997.


"Impossible Happiness: An Eulogy for Peter Orlovsky" by Steve Silberman


Visit Facebook group: "Our Allen"
Posted by Jacqueline Gens at 11:30 AM