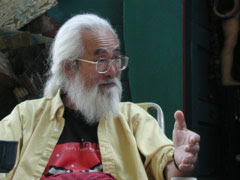 Nanao Sakaki, the hip beat generation Japanese poet, died on December 21, 2008. In a communication from Gary Snyder, some details of his last hours are recorded. Nanao was 86 years old.

Snyder writes: "Last night I got word from Japan that Nanao Sakaki had suddenly died. He was living with friends in the mountains of Nagano prefecture in a little cabin. He had stepped out the door in the middle of the night to stargaze or pee and apparently had a severe heart attack. His friends found him on the ground the next morning. Christmas afternoon they'll hold the otsuya -- intimate friends drinking party in his room, sitting with his body -- and a cremation after that. He was one of my best friends in this lifetime".

An elusive figure of the counter culture, Nanao was renowned as a great walker and hiker whose poetry was full of surprise and deep irony. He was revered in Japan among followers of the ecological movement and young people living on the land.

I once spent the summer of 1985 living with Allen Ginsberg, Philip Whalen and Nanao for about eight weeks in Boulder, Colorado while NAROPA was in session. One of my fondest memories of that time was when my car ran out of gas on a small hill at a busy intersection on Arapahoe Ave. I was driving Allen, Philip and Nanao back to 1001 Mapleton Ave where we were living. When my car stalled--Allen jumped out of the car and had me open the hood. Several young men stopped to assist us as Allen sagaciously inspected the interior under the hood while traffic wildly swirled around us in the middle of the intersection. Philip did nothing and remained sitting calmly in the back seat while Allen was engaged in various discussions with the young mechanics. Nanao disappeared and returned about 20 minutes later with a red gasoline can filling the gas tank without a word. He knew exactly what to do!

Nanao had a strong will that must have served him well. I don't think he was one to coddle neurosis. Once at a party, a friend's small child was having a major two-year old melt down. Nanao, without missing the opportunity, while stirring something on the stove, quietly said, "World War III" as the child wailed on. I always had the feeling that Nanao did not suffer fools lightly or even childish temper tantrums.

Allen was very fond of Nanao and supported his various causes in Japan--even sacrificing an extremely lucrative photographic exhibit contract with the Japanese department store, Parco, so as not to offend Nanao's politics.

For years I carried around a small hand-made book of Issa's poems translated by Nanao. Issa (1763-1827), like Nanao, was something of a vagabond and deeply skeptical of any kind of authoritarianism.

Grasshopper, good singer!
take care of my tomb
when I die* 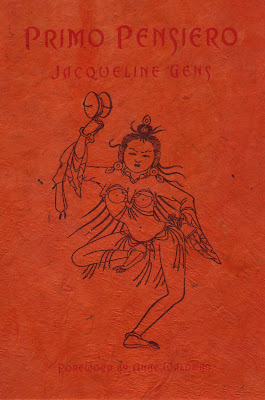 Primo Pensiero is now in print published by Shivastan Publications of Woodstock and Kathmandu.

This debut bouquet of poems is an elegant display of ordinary mind spiked with the magic and heart of "Big Mind" sensibility. Gens' experience travels from Vermont woods to Tzintsunzan in Patzquaro, and to realms of devotion rare in contemporary poetry --from Foreword by Anne Waldman