This sound recordings is made available for noncommercial and educational use only. All rights to this recorded material belong to Philip Whalen © 2004-2007. Used with permission of the Literary Estate of Philip Whalen. Distributed by PennSound.


Joanne Kyger reading, introduced by Robert Hass at University of California, Berkeley
The video is about 30 minutes long and well worth watching.
Posted by Jacqueline Gens at 5:47 AM

"Whalen and Kyger are essentially School of Backyard poets, who look out their kitchen windows and see the universe. Both have given themselves permission to write about what is immediately in front of them and/or on their minds, no matter how exalted or mundane. They are both domestics who leave plenty of room for splendor. Both have mastered the conversational; both feed off slang. Everything is the subject of their poems. Now, these two remarkable careers are represented by a pair of retrospective collections: "The Collected Poems of Philip Whalen," edited by Michael Rothenberg, and Kyger's "About Now: Collected Poems."

To read more of Lewis MacAdams' fine review, click on the title above.

Electronic Poetry Resource links on Philip Whalen (the most comprehensive)

from an email I wrote following Philip's death in 2002.

Poet and Zen master, Philip Whalen, Roshi died on June 26 (2002) at 5:50 am. Among the last of the surviving beat generation writers, Philip was a remarkable and authentic presence. I count him among my first dharma teachers. He was a friend and teacher to many Buddhists from all the practicing lineages.As a poet, he was uncompromising in his dedication to remain true to his calling, outside the range of conventional literary circuits--so rare these days.

On October 6, 1955, he was a participant in the historical Six Gallery reading in San Francisco where he read with Kerouac, Ginsberg, Snyder, Philip Lamantia, and Michael McClure. His poetry appeared in issues of the Evergreen Review, as well as other small journals of the period, and in 1960 he appeared in Donald Allen's New American Poetry anthology. Whalen is the author of numerous books of poetry, including Like I Say and Memoirs of an Interglacial Age which, along with other early books, were collected in the 1967 publication of On Bear's Head. He is also the author of two novels, You Didn't Even Try and Imaginary Speeches for a Brazen Head. More recent books include The Kindness of Strangers, Severance Pay, Scenes
of Life at the Capital and Canoeing Up Cabarga Creek.

Throughout the 1970's and 80's he taught at the Jack Kerouac School of Disembodied poets at the Naropa Institute (now university) where I had the privilege of living with him and Allen Ginsberg the summer of 1985. I owe a lot to him for breaking through my ignorance about the 'nature of mind.' An imposing presence and mountain of a man, he could stop your mind with a gaze.

Not one actively to seek fame, in fact, outright rejecting its lure at the height of the San Francisco poetry renaissance and his own burgeoning career, Philip was among the first generation Americans to fully embrace the Buddhist teachings living for many years in Japan
while studying with traditional Zen masters before returning to the US where he spent the last 30 years or so devoted to his practice primarily-- then some on his poetry. In recent years,
although nearly blind and in failing health, he was installed as Abbot of the Hartford Street Zen Center in San Francisco, a hospice dedicated to working with Aids patients. His life's work embodied the classic paradigm of the monk/poet living simply and with great impartial compassion towards all.

I come to look at the cherryblossom

for the last time

These blossoms will be gone in a week

I'll be gone long before. 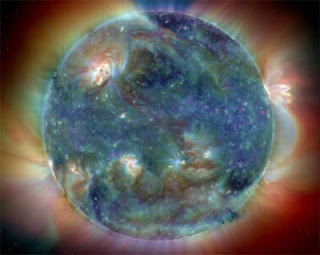 Tip north, darkest day of the season
but down below, reverses to the longest
with sunny rays dead on.
Either way, when gaiety dons
festoons of snowy boughs or fruit laden
arbors heaving to golden harvests,
our work is done as we anticipate
the New Year, between the dark
and light of solstice.
You hoary voyagers—my friends
bearing gifts of luminous mind
outside the turn of celestial events,
I send you greetings
from north to south
across the equatorial circumference
of our common purpose,
whose light, after all,
outshines the arc of time.

*Nasa composite image of the sun using extreme ultraviolet light at summer solstice circa 2004 from different vantages on earth.
Posted by Jacqueline Gens at 10:28 AM