A Few Missives from Allen Ginsberg 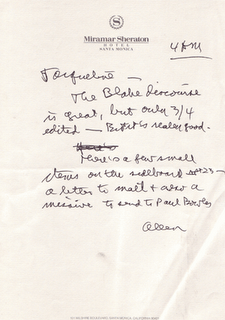 Here's another note written in haste at 4:00 AM or tiredness since it doesn't have a characteristic date. It's probably circa spring/summer of 1994 when I lived next door in Peter Orlovsky's apartment as Allen mentions picking up mail and a "missive" to Paul Bowles on his kitchen sideboard at Apt. 23. I lived there for about six months before moving back to Vermont. Every morning, I would find a bunch of notes slipped under the door.The whole thing reads:

The Blake discourse is great, but only 3/4edited-- But it is really good-

I remember the Blake piece as he later sent me
a copy of the publication after I was back in
Vermont. I've used it many times for either classes,
papers or lectures on Blake.

It was not unusual for him to leave an opinion/commentary
about someone or something. 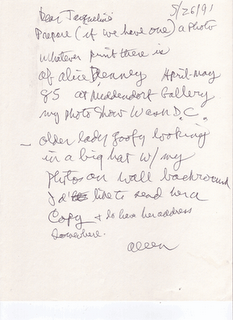 Here's such an example dated 5/26/91 asking me to print a photo he took of Alice Denney whom he affectionately refers to as "older lady goofy looking in a big hat w/my photos on wall background." Allen often sent people photos he had taken of them. One of my duties in his office was to organize the photo collection, arrange for printing negatives with either Sid Kaplan or Brian Graham, be the point person for photos in publications, and assist with curating shows. I worked on several large projects such as huge FNAC show that traveled France for a year or so, and many of the stills used in Jerry Aronson's film, Life and Times of Allen Ginsberg. I loved his photos that document for decades both the unknown and known denizens of his world. He had a clear eye for detail and respect for his subjects. My meeting him coincided with his self-consciousness as a photographer in the early 1980's under the tutelage of Robert Frank, Bernice Abbot, and others. He had by then become, a real shutterbug, according to Bernice Abbot, snapping thousands of photos. 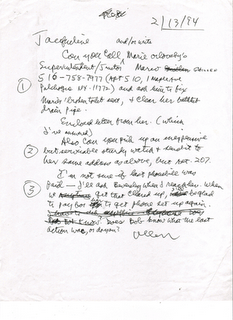 Here's another fairly typical request I used to get from Allen asking me to deal with some domestic crisis--this time on behalf of Marie Orlovsky, Peter Orlvosky's sister. I remember this one well as it took a lot of logistics to get her bathtub drained.

Allen took care of many people on a regular basis such as Gregory Corso, Herbert Hunke, the wonderful poet--Jimmy Schyler, Orlvosky & family, and anyone among his friends who had a basic need. Allen's non-profit, The Committee on Poetry issued modest weekly checks for some who often stopped by the office to collect. Hunke had a funny ingratiating style. Always impeccably dressed, he annoyed me with his complements on what I was wearing--totally phoney, as in those years it was all GAP T-shirts and jeans. Gregory was, well Gregory--mostly rude and ranting or really subdued if he was hurting. As much as he could be so obnoxious, I had a soft spot for Gregory who had a streak of almost Turretsian honesty. He would say the most wounding things. For years he refused actually to say my name because once in Boulder I refused to drive him to Denver to score drugs. He used to refer to me to Allen as the girl with the strange eyes.

Here's a snapshot I took of Gregory and Allen in my office at Naropa circa 1985 with Gregory's last born son. I was then assistant director of the summer programs with Jane Fiagao who, sadly, died a few years ago from breast cancer. We had fun in that office where a steady stream of faculty and students settled into the ugly black naugahyde couch opposite our desks. Once when two phones rang simultaneously on my desk, Phil Whalen sitting on that couch told me to "breathe" before I picked up the phones. 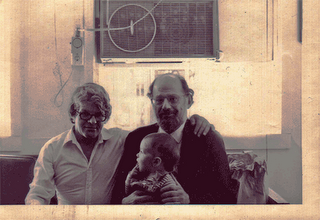 Posted by Jacqueline Gens at 11:36 PM